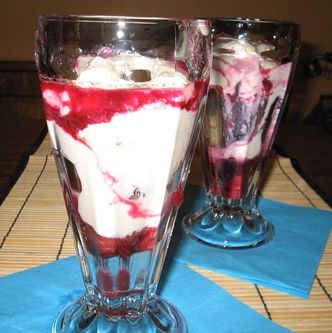 English trifle originated in the 1700s as a way of using up stale cake, which is soaked in sherry and layered with fruit, custard and whipped cream.

Peel and chop the rhubarb into a saucepan.

Add the water, brandy, cinnamon and brown sugar and simmer for 15 minutes. Cool.

Take four sundae dishes and place a plum in the base of each.

Pour the sherry into a shallow bowl or plate.

Dip four biscuits one by one into the sherry and quickly break one into each sundae dish.

Add a tablespoon of soya yoghurt into each dish.

Divide the rhubarb mixture between the sundae dishes.

Dip the remaining four biscuits one by one into the sherry and then add to each a sundae dish.