Foie gras ("fatty liver") is a very popular delicacy in France, where most of the production takes place. It is produced by enlarging the livers of geese and ducks through force feeding. 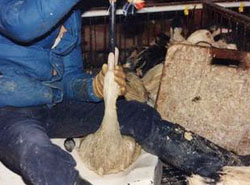 The force-feeding is done by farm workers several times a day. They will grab the animals one by one and shove long metal pipes down their throats all the way to their stomachs. They will then squeeze a lever attached to the pipe, activating a mechanized pump, which will shoot a large amount of corn mixture directly into their stomachs.

The foie gras industry uses mainly male ducks and geese, because they produce larger livers. Female hatchlings are thrown in the trash. 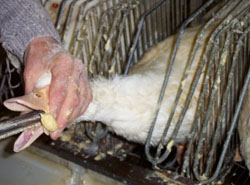 The force-feeding will cause the animals to become grossly overweight in just a few weeks. Their livers will expand to up to 10-12 times their normal size. The overweight animals have a lot of trouble walking, standing and even breathing.

The force-feeding also causes severe damage to their throats. A lot of ducks and geese will die before they are send to be slaughtered. The mortality rate of animals raised on foie gras farms is among the highest in the farming industry. 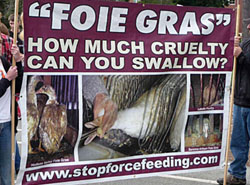 In the United States foie gras has been banned in California and New York City. It has also been banned in most of Austria, the Czech Republic, Denmark, Finland, Germany, Italy, Luxembourg, Norway, Poland, Turkey and the United Kingdom.